Apocalypse is a mutant supervillain from Marvel Comics, and one of the biggest threats to Earth. He appeared in the 91st episode of DBX where he fought against Black Adam from DC Comics.

En Sabah Nur was born 5,000 years ago into a desert tribe in Ancient Egypt, who took one look at the blue skinned mutant and left the supposed abomination behind to die. The infant Apocalypse was found by the leader of a band of desert raiders, the Sandstormers called Baal, who adopted the boy and named him "En Sabah Nur" - "The First One," as he believed that the child was the first of a race of beings who would one day inherit the Earth (Nur was not actually the "first" mutant, as there were others who came before him - Selene, notably, is nearly thrice as old at 14,000). Baal raised En Sabah Nur and indoctrinated him into the brutal philosophy of his raiding band: survival of the fittest, and the idea that life is and should be a never ending struggle of the strong against the weak and each other to earn the right to live and prosper.

Throughout the centuries, the immortal Apocalypse traveled to numerous civilizations and cultivated worship of himself, and manipulated them into conflict and civil war to separate the strong from the weak. He eventually gained more power after discovering and bonding with the technology of a crashed Celestial ship, granting him a wide range of abilities, but making him so powerful that he had to begin to periodically enter lengthy periods of regenerative rest to prolong his lifespan, and seek out powerful mutants as host bodies. He awoke at various points to influence history and attempt to recruit useful people to his cause, activating the powers of the mutant Exodus in the 12th century, and transforming Victorian mad scientist Nathaniel Essex into the immortal geneticist Mister Sinister.

The explosion in the mutant population in modern times awoke Apocalypse from his slumber and set him loose upon the world once again. He now actively seeks to provoke a war between humans and mutants so that mutants can inherit the Earth under his guidance, whilst trying to increase his power by finding powerful mutants to serve as his new host. His plans often bring him into conflict with the X-Men, who he regards as worthy opponents who have earned the right to live in his dystopic mutant empire, when he isn't brainwashing them to serve as his minions or trying to steal their bodies, or trying to destroy them as threats to his plans. 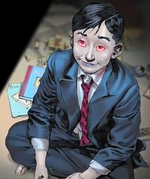 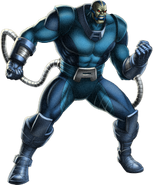