Animal-Vegetable Mineral Man is a supervillain from DC Comics who battles the Doom Patrol.

Animal-Vegetable-Mineral Man is a supervillain who fights the superhero team, the Doom Patrol. Formerly a Swedish scientist named Sven Larson, he gained powers when he fell into a large vat of amino acids. He uses his strange new powers for his own personal crimes. He has later joined and became a member of the Front-Men. 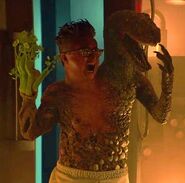