Anakin Skywalker, also known as Darth Vader, is one of the main protagonists, turned main antagonists, of the Star Wars saga.

Born into slavery on the planet Tatooine, Anakin Skywalker lived with his mother, Shmi Skywalker. From a young age, Anakin demonstrated incredible piloting skills and was one of the only humans known to have participated in the dangerous sport known as Podracing. When he was 9 years old, he was discovered by Jedi Master Qui-Gon Jinn, who after inspecting his blood, realized his potential in the force exceeded even that of the Jedi Order's most powerful members.

In a fateful podrace, Anakin won his freedom and was taken by Qui-Gon to join the Jedi Order. After Qui-Gon's sudden death, Obi-Wan Kenobi was appointed Anakin's master. Over the next ten years, Anakin and Obi-Wan became good friends. However, the Jedi code and the mandates of the Order conflicted with Anakin's emotional hardships, namely the death of his mother and his romantic feelings for Padmé Amidala. Despite these struggles, Anakin received the support and companionship of Sheev Palpatine, who helped keep Anakin mentally stable, just in time for a galaxy-wide conflict known as the Clone Wars.

During the first year of the conflict, in a rare move by the Jedi Order, Anakin would be appointed an apprentice of his own, Ahsoka Tano. During the three-year conflict, Anakin, Obi-Wan and Ahsoka were major players, and Anakin's piloting skill achieved greater heights and recognition. But when Ahsoka was expelled from the Jedi Order and chose not to come back after her innocence was proven, Anakin developed resentment toward the Jedi Order. In the final days of the Clone Wars, Anakin began experiencing premonitions of Padmé's death shortly after learning she was pregnant with their child.

Determined to find a solution to his problem, Anakin faced further issues and was not granted the rank of Jedi Master despite being appointed to the Jedi Council. With fewer options, Anakin sought an audience with Palpatine, who revealed his hidden identity as Darth Sidious, the Sith Lord who orchestrated the Clone Wars. Although Anakin informed the Jedi of Palpatine's identity, he would betray them to save his life.

In doing so, he was anointed Darth Vader and carried out the grand plan of the Sith by committing mass genocide on the Jedi Order, which would make him strong enough with the Dark Side of the Force to be capable of saving Padmé's life. Intoxicated by his newfound heights of power, Vader would battle Obi-Wan in a fateful duel that saw him defeated and burned alive, only narrowly escaping with his life.

Palpatine rescued Vader before placing him inside an armor with a mobile life support system, completing his transformation into Darth Vader. As the Republic transformed into the Empire, Darth Vader removed all traces of Anakin Skywalker from history and faithfully served Emperor Palpatine and the Galactic Empire for over two decades before learning his child, Luke Skywalker, lived. Unbeknowst to him and Luke, there was another, Leia Organa.

Seeing his son as his only chance of defeating Palpatine, Vader made multiple attempts to lure his son to the Dark Side, but failed each time until his final defeat at Luke's hands. However, Luke renounced the Dark Side and proclaimed himself a Jedi, just like his father. An angered Palpatine decided to kill Luke, but Anakin Skywalker acknowledged there was still good in him, and sacrificed himself to defeat the Emperor, saving Luke's life.

Redeemed, Anakin transcended into the Force and became a Force Ghost, he happily watched on as his son successfully brought about the return of the Jedi.

Anakin Skywalker is the Most Tanky hero in Star wars Battlefront 2. His Whole style is to get Into People's face and Beat the Shit out of them, While Using His Ability's to Good use.

Maximum regen: 250. (That's Quite a lot. That mean that a Villain would have to bring him below 600 Hp to Stop him Regenerating to full health.)

Damage output: 130 damage from the Front, and 170 From Behind. (This means he can 1 shot the Officer, Assault and the Sniper, who only have 150 Hp.) This Damage can be Increased.

How pull Dominance works, is that it... Well... Pulls Enemies towards him. Nuff said. It does 150 damage, Has a 15 Second cooldown, and knocks Enemies off their feet.

See, THIS Is what made Anakin so F*$king Over powered in His Release. This Ability Forces Anakin to Stand still, while he charges it up. "Oh, but doesn't that make him an Easy target?" That's the thing.

This Ability get's more powerful, The More he's shot. It deal's 100 Damage, But get's More powerful the Longer he gets shot. It covers a 360 Circle around Anakin, And has a 15 second cooldown.

With this move, Anakin does a Over head slash down, Which deals Major damage. Enough to 1 shot 3 of the main Classes, And it it lands it's second hit (Anakin raising his Lightsaber ABOVE his head) it deals 250 damage. That's Powerful enough to 1 shot ALL 4 Classes! (BUT, It can only 1 shot the Heavy ((Who has 200 HP)) If it lands the 2nd hit. Otherwise, it takes 2 hits to kill the Heavy)

That Sound Pretty powerful, But get this: We haven't even Mentioned his most OP Ability.

Ability 4 AKA His Most Powerful Ability: Retribution.

Here, He channels All his Rage and Anger, and Pulls a Vader going beast mode. What do i mean by that?

He does a Mass force choke, Chocking everybody Around him. He deals, a Jaw dropping 222 damage, Powerful enough to 1 shot all 4 of the Main classes. (Assault, Sniper, Officer and Heavy.) But it Requires Anakin to take 2,500 damage, to charge up. And remember, Anakin only has 800 Hp. And, Technically has no Cooldown.

Anakin's star cards allow him to Become Even more Offensive. and here are some of them:

Steamroll: Everytime Anakin Kills Somebody, How much Stamina he Uses when Blocking or Attacking is Decreased by 2%. Up to a Maximum of 40%.

Massive strikes: Anakin's basic is More Damaging, BUT Drains more Stamina. He has Increased 25% Stamina cost. And increases his Damage by 36.

So you can see why he's Op now, Right? Steamroll decreases his Stamina cost Everytime you kill somebody, while Massive strikes Increase it. Therefore, Steamroll Nullifies the Stamina increase done by Massive strikes. So, Now you deal 206 damage (Through Massive strikes) And if you play your cards right, with Very little Stamina usage. 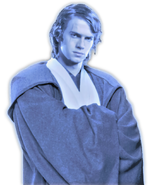