Death Battle Fanon Wiki
Register
Don't have an account?
Sign In
Advertisement
in: What-If? Combatants, Antagonists, Characters who can teleport,
and 21 more

Ambush Bug is a superhero from DC Comics.

Ambush Bug's true name is supposedly Irwin Schwab, but it must be noted that he suffers from mental problems that prevent him from truly understanding reality around him, so even his true identity might be no more than a delusion on his part. His origin is disputed, although the most commonly accepted origin is that Brum-El of the planet Schwab sent his clothes from his supposedly doomed planet, hoping that his wardrobe would survive, only to have it intercepted by a giant radioactive space spider. In the resulting crash, only two articles of clothing survived: the Ambush Bug suit, which was subsequently found by Irwin Schwab, and Argh!Yle!, an argyle sock with a metal mask. At first, Irwin used the suit for criminal intentions - running into Superman and the Doom Patrol as a result, before deciding to become a well-intentioned superhero instead. 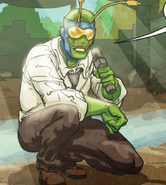