Amazo is a robotic supervillain of DC Comics.

Amazo is the creation of Professor Anthony Ivo. He utilizes "absorption cell" technology in order to copy (formerly downright, well, absorb) the powers of superhumans. This has made Amazo one of the biggest threats the Justice League ever faced. 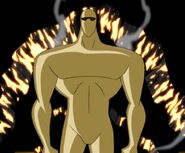