Alice Liddell is the youngest daughter of Arthur Liddell and Mrs. Liddell and the younger sister of Lizzie Liddell who is the sole survivor of a house fire that killed her family, causing her to have immense trauma when she was a child, affecting her reality, as well as her imaginary world, Wonderland, and its citizens.

As Alice struggled with the fragments of her memories, post-traumatic stress disorder, and deteriorating mental health after a ten-year catatonic state in Rutledge Asylum, she returned to Wonderland to save it from the Queen of Hearts, killing the monsters inside her head.

Alice regained enough sanity to leave Rutledge and Pris Witless helped Alice to get a room at the Houndsditch Home for Wayward Youth. Her psychiatrist and head of Houndsditch, Angus Bumby, helped Alice forget her traumatic memories using hypnotherapy. Unfortunately, Alice still suffered from poor mental health and returned to Wonderland to find the true cause of her family's death. After discovering that Bumby was the mastermind behind her family's death who also raped and molested Lizzie, she murdered him to avenge her family. With her reality fused with Wonderland, Cheshire Cat remarked that her memory was safe for the time being.

After leaving Houndsditch, Alice found a job at the London Royal Opera House as a theater worker. She also gained the ability to peer into the minds of others and explore their Otherlands.

To the Moon Dress

Around the World Dress

To the Centre Dress 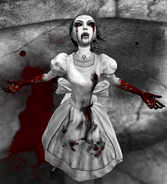