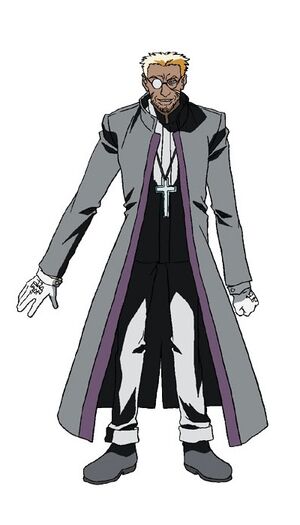 Alexander Anderson is a character from the anime/manga series, Hellsing.

Alexander Anderson (アレクサンド・アンデルセン, Arekusando Anderusen) is a Vatican priest, working as a vampire purifier and slayer for the Iscariot branch of the Vatican. He is also the arch-rival of Alucard. In the English dub of the anime and OVA, he is portrayed as Scottish but canonically his nationality is "unknown". He lives in Italy, operating an orphanage outside Vatican City. He is voiced by Nachi Nozawa in the Japanese anime, and Norio Wakamoto in the OVA series; he is voiced by Scottish actor Steven Brand in the anime and OVA English dub. He serves as the foil to Alucard as both an antagonist and type of anti-villain in the series, both in the TV anime and the OVA series.