Alex Kidd is the main protagonist of the eponymous video game series made by SEGA. He first appeared in the 1986 video game, Alex Kidd in Miracle World.

Initially, in the original game, Alex Kidd is an orphan who lives alone on Mt. Eternal, on the planet Aries (also known as "Miracle World"), where he has trained in the Shellcore technique. This technique enables an Arian to alter the size and toughness of their fists through sheer willpower, and enables one to shatter rocks with one's bare fists.

After the disappearance of King Sander Radaxian (referred to in the manual as "King Thunder"), the planet Aries is thrown into disarray. A usurper, Janken the Great, kidnaps the next in line to the throne, Prince Igul (referred to in the manual as "Egle"), and his fiancée Princess Lora. Many of the citizens are turned to stone through Janken's magic. Alex Kidd learns from a dying man that he is in fact a lost member of the Radaxian Royal Family, son of King Thunder and brother of Prince Egle. Alex Kidd sets out to discover the whereabouts of his father, rescue his brother, restore the kingdom, and destroy the monstrous minions of Janken. Numerous magical artifacts and medallions are needed to be discovered to progress in the story.

During the game, Alex can collect "Baums" (the currency of Miracle World) which can then be used to purchase extra lives, items, power-ups and vehicles for Alex Kidd from shops at the start of several stages, such as the Sukopako Motorcycle and "peticopter" (a small pedal-powered helicopter).

After Alex defeats Janken the Great, the game explains how Alex restores peace to Radaxian, and that the people who were turned to stone by Janken have returned to normal. In the city, Egle is crowned King of Radaxian, and Alex Kidd, with his martial arts, takes the position of Defender of the City, although his next goal will be to find his father, King Thunder.

Some time later, in Alex Kidd in the Enchanted Castle, Alex hears a rumor that his long lost father (referred to in this game as King Thor) is alive and well on the Planet Paperock. The Planet earned this name as it is inhabited by experts at the game "Paper, Rock, Scissors." Despite discouragement from his family, Alex travels to the Planet Paperock in hopes of finding his father. 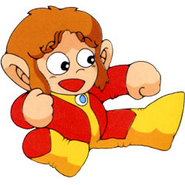 Alex Kidd as he appears in The Enchanted Castle 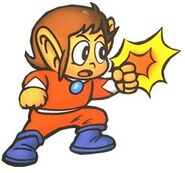 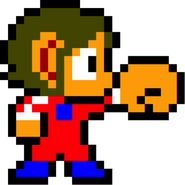 Alex Kidd as he appears in Sonic & Sega All-Stars Racing

Alex Kidd as he appears in Shinobi World

Alex Kidd as he appears in Segagaga alongside Sonic the Hedgehog 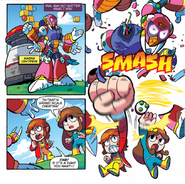 Alex Kidd as he appears in Worlds Unite alongside Stella