Akame is the titular protagonist of the anime/manga series, Akame ga Kill! She previously fought against Killua Zoldyck from Hunter x Hunter in the 52nd episode of DBX. 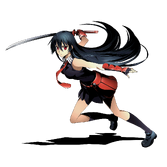 Add a photo to this gallery
Retrieved from "https://deathbattlefanon.fandom.com/wiki/Akame?oldid=1241762"
Community content is available under CC-BY-SA unless otherwise noted.