Ainz Ooal Gown is the villain protagonist of the light novel series, Overlord. He is the remaining Supreme Being of Nazarick, serving as the guild master of the guild named before him, as well as the Sorcerer King of the Sorcererous Kingdom.

The year is 2138 AD and Earth is a nigh apocalyptic wasteland.  The only solace that humans have is in Virtual Reality Games that simulate real life very well, only lacking a sense of smell and having a limited touch interface.  One of these games was named Yggdrasil.  It was in this game that a notorious guild existed.  That guild's name was Ainz Ooal Gown.

There were many members who shared in its adventures thoroughout the Nine Realms of the Game.  The leader of this guild was named Suzuki Satoru, but in game he was Momonga.  Unfortunately, the fun that Momonga and his friends had was not to last.  Over time, the other members dropped out of the game one by one, until only Momonga and a few others were left.  But, when the game Yggdrasil was finally shut down, Momonga was the only one who was still active in any meaningful way.

Momonga was expecting to log out once the servers shut down for good and get a good nights' sleep, but that was not to be. To his surprise, the Guild's base was transported, him included, to a new world. Plus, he was no longer human. He was now stuck in the body of his avatar. That of an undead being known only as an Overlord.

Create High Tier Undead (4/day) -  Can create Undead up to level 90 with this skill.

Create Middle Tier Undead (12/day) - Can create Undead up to level 50 with this skill.

Create Low Tier Undead (20/day) - Can create Undead that are up to about level 30.

Despair Aura I (Causes Fear in those within its' effect radius.  Fear reduces the opponents' stats.)

Despair Aura II (Causes Fear and Panic, which is a stronger version of Fear that causes a desire to flee from the user.)

Negative Energy Touch/Touch of Undeath (Causes Instant Death through direct contact.  It can be turned on and off at Ainz' discretion.)

Undead Lieutenant (Can use EXP points to make a stronger Undead.)

Dark Vision (Can see in the dark) 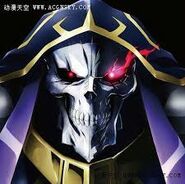