Jedi Padawan (formerly), Commander, Member of the Rebel Alliance/Alliance to Restore the Republic

Ahsoka Tano is a major character from the animated television series, Star Wars: The Clone Wars.

Born on the planet Shili, Ahsoka was discovered by Jedi Master Plo Koon and was raised in the ways of the Force in the Jedi Temple. By the time she was 14 years old, the Clone Wars were underway, and the Jedi were forced to enter the battle. She was assigned to Jedi hero Anakin Skywalker to train as a Padawan under his wing. Yoda assigned a student to Skywalker in order to teach him to let go of his personal and emotional attachments, but on the other hand, the two of them have shared a close bond throughout the war, almost resembling a father-daughter relationship. However, near the end of the Clone Wars, Ahsoka left the Jedi Order after being falsely convicted of a bombing of the Temple, and by the time she was an adult, Ahsoka became a leading figure in the Rebel's battle against the young Empire, and was last seen locked in a battle with her former Master, now known as Darth Vader. 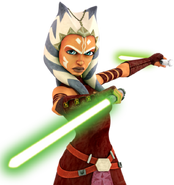 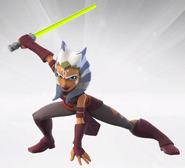 Art from Star Wars Force Collection
Add a photo to this gallery
Retrieved from "https://deathbattlefanon.fandom.com/wiki/Ahsoka_Tano?oldid=1175712"
Community content is available under CC-BY-SA unless otherwise noted.