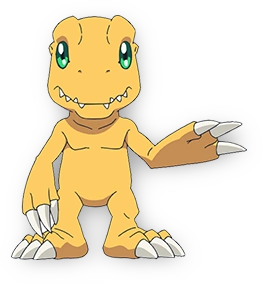 Agumon is one of the main protagonists of the Digimon Adventure Japanese anime television series, not to be confused with the Agumon from Digimon Data Squad. He previously fought Charizard in the 57th episode of Death Battle; Pokémon VS Digimon.

Agumon is dinosaur-like Digimon who was originally a Koromon waiting for his predestined human partner. When Taichi Kamiya ended up on File Island, Koromon digivolved into his current state to protect him from a wild Kuwagamon. Though a child like his human partner, Agumon is brave and willing to protect him and save both their worlds from evil.

Agumon's digivolved form, he becomes a Ceratosaurus-like Digimon with the skin of his head hardened into a horned carapace. In his state, Greymon is an extremely aggressive Digimon whose entire body, from his sharp claws and gigantic horns to his tail, is a weapon. But Greymon is also highly intelligent, able to work well on his own or with a group of allies.

Greymon's ultimate form that he obtains once he defeated enough formable opponents while infused with the power of the Crest of Courage, most of his body encased in cybernetic armor made of Chrome Digizoid. His Trident Arm can be used to effect as a close-range and mid-range weapon. In his state, compared to weaker blue-skinned variations, MetalGreymon is as powerful as a nuclear warhead and could wipe out a low-level digimon out of existence easily. 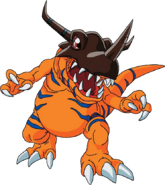 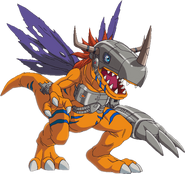 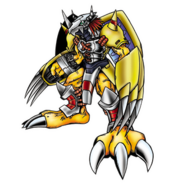 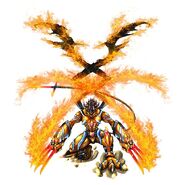 Agumon bond of courage
Community content is available under CC-BY-SA unless otherwise noted.